I've blogged about depression, but something always held me back about bipolar disorder. Well, here it goes ... 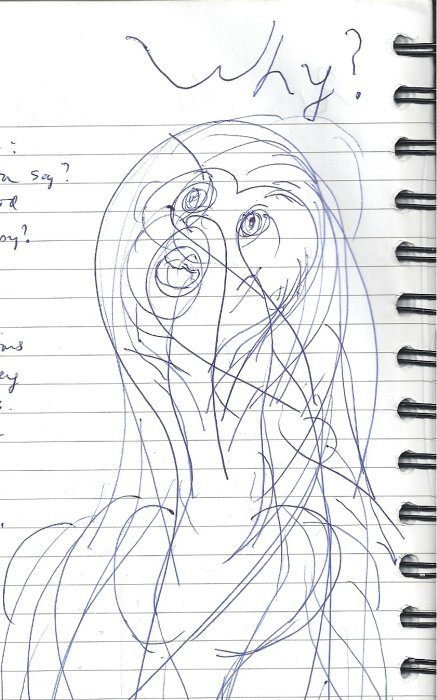 In my early twenties, I was diagnosed with bipolar disorder.

I went through bouts of mania where, in no particular order, I trashed my townhouse, ran up large debts, got kicked out of bars, had run-ins with police, considered killing myself while excessively speeding, had multiple sojourns in psych wards, occasionally straitjacketed.

I took lithium, haloperidol, fluoxetine and sertraline, among other drugs. I talked a mile a minute, spoke in puns and rhymes, and switched topics incessantly. I felt euphoric, creative, amazing—like a butterfly emerging from its chrysalis. The feeling is indescribable, one of endless energy. Only those who've gone through it can truly understand mania's, well, mania.

Juxtaposed with my normally reserved, calm, almost shy demeanour, my behaviour alarmed friends and family. “I don't know who you are anymore” was a recurring theme. I arrogantly brushed their concerns away.

I burned a lot of bridges. I hurt a lot of people. I have made some amends.

After one prolonged manic episode, I was admitted, unwillingly, to the Queensway-Carleton Hospital psych unit in Ottawa. I stood in the rec room, at the pool table, silently. My frustration suddenly boiled over. Whipping billiard balls in every direction, I spewed anger, malice and self-hatred. Afraid and confused, my life in tatters, I had had enough. I froze, almost catatonic. Big, burly security guards hauled me away.

Lockdown. Journey into the abyss.

The hard truth about bipolar disorder is this: You cannot have mania without its polar opposite—depression.

Depression is the longest, hardest and toughest part of bipolar disorder for me: coming to grips with the psychological damage inflicted by mania. It was a deepening void which sapped and gnawed at my soul. All happiness was purged until there was nothing. A vicious cycle of guilt, doubt, regret, anguish, anger and apathy washed over me. A mind-numbing and utterly destroying sense of self-worth. At one point, I hadn't showered for a month.

I wasted away, bit by bit every day. Days turned into weeks. Weeks into months. Months even turned into years.

As with mania, only those who have gone through depression can truly understand its torturous grip. Having gone through two major depressions, I know its effects. It debilitated me to the point where I quit my job as a teacher and didn’t want to live. Countless times, I prayed to fall asleep and never wake up.

On one occasion, I fashioned a noose, and tied it around a steel beam in my parents' basement. I climbed a stool, placed the noose around my neck, imagining peace—and death. But I couldn't bring myself to do it.

It took over two years to recover from my first bout of depression, and three years to fully recover from my second. Sometimes, I wrote letters addressed to my manic self, begging him to wake me up, to help me rise. But there was nothing. I tried psychotherapy, cognitive therapy and took antidepressants, which helped somewhat.

But in the end, I came to an amazing revelation: I had to feel terrible in order to feel better. I had to sink lower than I could ever think possible. In that crucible, I was distilled into someone better: a stronger, more compassionate, patient and honest man. It laid the groundwork for me to become a better husband and father. A better person.

Mental illness is not rational. I spent countless hours analyzing my depression, to come up with a logical solution to beat it. In the end, I simply could not apply a rubric of rationality to an irrational situation.

I don’t think mental illness is something to be defeated. It needs to be acknowledged, even embraced, before it can be dealt with. I don't want to vanquish my depression, or my mania. I want to live in harmony with it, to balance and respect it.

I have made my way through my murky morass and have come out of it with a better understanding of myself, as well as a heightened empathy for anyone affected by mental illness.

I was lucky to have loving, patient parents who gave me time and space and a roof over my head. If it wasn't for them, I'd be on the streets—or dead.

I received that love from my parents, and I am alive today because of it.

Thank you, Mom and Dad. I love you.