How a potluck lunch brought me closer with my colleagues 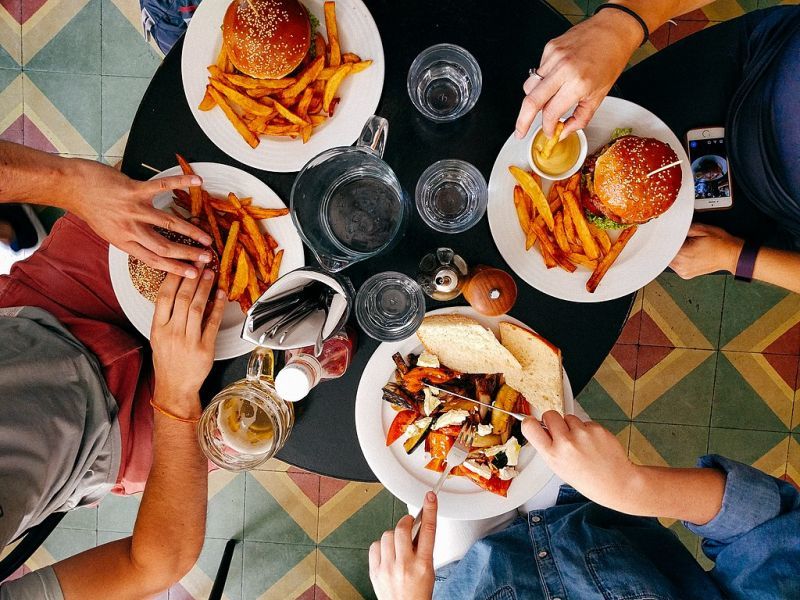 The "dîner de dorés" (pickerel feast) was a couple months in the making. My colleague, Louise, often talks of her love of fishing and being on the lake with her family.

"One day I'll bring in some fish I've caught for a nice team lunch," she told the team at work.

Louise sent the invite to our Outlook calendars. I looked forward to the potluck feast. The email conversation went something like this:

"Get two and I'll split the cost on those fries," Sophie said.

I love food. Feed me and I'm happy. But there's something special about a potluck. It's different than going to a restaurant. Everyone brings a little bit of themselves, something that reflects their personality—whether it's homemade or store-bought. Often it's a mish-mash, but somehow, it always works out.

We're lucky to have a nice, open kitchen area at work. We joined three tables, laid down our goods.

"That's a great idea," some people from other divisions said, as they walked by and saw our potluck. "We should do that, too!"

The star of the potluck, "le doré," was front and centre. Louise had caught the pickerel herself; she breaded it lightly. My mouth watered. I love fish. I grew up eating all kinds: salmon, haddock, char, tuna. Did I mention I love fish?

At work, there are many francophones. I often speak in French, I like to practice. I took French immersion growing up but became rusty over the years. So I make the effort, it helps me rewire some neural connections.

It's also good to know both official languages in this, our bilingual country. I started reading French books and I listen to French radio. I highly recommend the drive-home show, "Véronique et les Fantastiques" on Rouge FM. It's good for a laugh and for learning French! They speak so fast, it's fun to keep up!

Speaking another language helps me overcome some nerves. I've become less afraid of making mistakes. I think fear of mistakes cause many to shy away from practicing a second language. In my group, I'm the only non-francophone, so I feel it'd be unfair for everyone to speak English all the time around me.

One day I overheard my colleague, Mireille, talk about her weekend. She was excitedly talking about a family event. When she said the French name it was fast, I couldn't make it out. I asked her, "C'est quoi ça?"

"You said something like, 'aybooshed-de-bay-day' but I know that's not quite it."

When francophones say it, it rolls off the tongue, sounds like one long word. It's quite fun to say. My French is not that bad, I make grammatical mistakes here and there, but I've actually started to catch the accent. I think I can mimic it pretty well.

"What does that mean?" I ask in French.

They said it slower. It still sounded like one long, quick word.

"How many words is it? Can you spell it out?" I asked.

She emailed me the spelling. When I saw it, it made more sense.

"Oui, but it's also 'blé d'Inde'," Sophie and Mireille said.

I tried my hand at the correct pronunciation. I said it fast, copying the cadence of my colleagues. It really rolls off the tongue. More like "ay-ploo-shed-uh-blay-daid."

I nailed it. Sophie and Mireille kept giggling and laughing. "Say it again!" they said.

I repeated it a few times.

"You sound like a francophone!" Sophie said, still busting a gut.

Another time, my colleague Lucie told me about a course she's taking. She lights up when she describes how much she loves it. "Je suis emballée," she said.

"It means you're really excited about something, like you're all wrapped up like a gift. It doesn't really translate well to English."

"Ah, okay, je comprends," I said. I learned something new.

Back to the lunch. Caro provided a nice, healthy vegetable tray. Yum! Denis arrived with two containers of fries: one regular, the other sweet potato. (Not so healthy, but yum!)

"I had to go to Manhattans," he said. "The chip truck wasn't there."

"No Lou Patate?" Louise said. (Lou Patate is the chip truck that is often parked outside our building.)

Then it was time for Mireille to unveil her surprise. Everyone waited. Was it candy? Lucie brought everyone a box of Nerds at our last team lunch.

Not candy. People made more guesses. Nope, nope, and nope.

She took out a ziploc bag.

"Épluchette de blé d'Inde!" I exclaimed. I clapped my hands with a big smile at the plump, delicious-looking corn Mireille brought.

But best of all, great company and conversation.

It's so nice to make good friends at work.